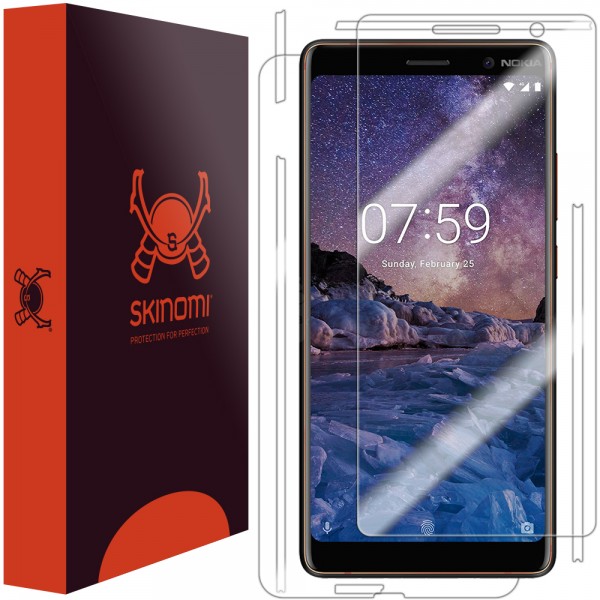 Our smartphone is exposed to lots of impacts in daily life – for example by sharp objects in our pockets or just by accident due to little negligences while using the phone. Scratches and other damages cannot be prevented without proper protection. The Nokia 7 Plus protection films Full Body keep the entire smartphone safe from wear. The precisely cut films do not only protect the display but also the back side and the frame of the Nokia 7 Plus optimally. Fingerprint sensor, cameras, flash, USB-C port, headphone jack, on/off button, speakers, microphone and proximity sensor are accurately left out.

The films consist of thermoplastic urethane and shield the phone permanently from traces of wear without limiting the functions of the Nokia 7 Plus. The display reacts normally to any touch, just as if no additional film would be on it. Additionally, the precise recesses for front camera, speakers and proximity sensor allow to use all functions of the Nokia smartphone. The high-quality screen protector is easy to install, crystal clear, virtually invisible and self-healing: small scratches on the film disappear over time.

Highlights:
+ Protection films TechSkin Full Body by Skinomi developed for Nokia 7 Plus for perfect all-round protection.
+ Film for the front covering the display entirely and leaving out front camera, speaker and proximity sensor.
+ Film for the back side with precise cut-outs for fingerprint sensor, dual camera and flash.
+ Films for the frame leaving USB-C port, headphone jack, on/off button, volume control, speaker and microphone uncovered.
+ True Touch: Nokia 7 Plus display reacts with the protective film without delay to each touch.
+ Display protector consisting of thermoplastic urethane with self-healing properties: small scratches on the film disappear over time.
+ No yellowing of the protection film thanks to a particular UV protective layer.
+ Easy and bubble-free installation: included spray allows to reposition and correct the screen protector during the installation.
+ Skinomi TechSkin screen protectors can be removed without residues.