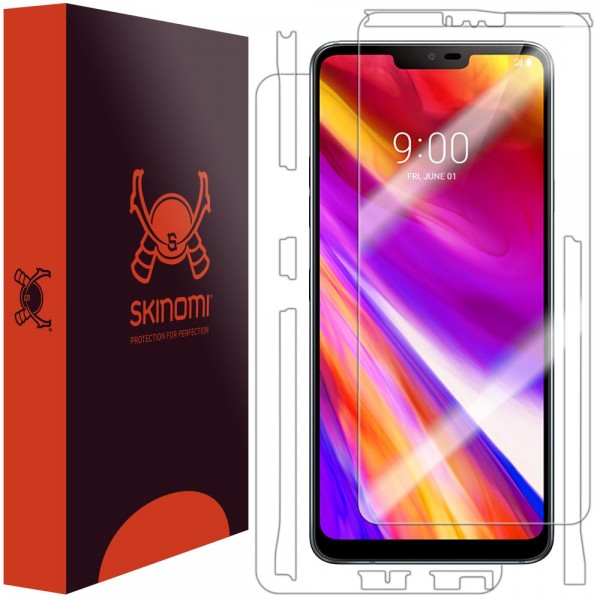 Flexible & Secure Payment
Description Evaluations 0
Description
Daily use of your LG G7 ThinQ can easily cause scratches or other damages. This cannot be... more
Close menu

Daily use of your LG G7 ThinQ can easily cause scratches or other damages. This cannot be prevented without proper protection. The scratchproof LG G7 ThinQ TechSkin Full Body films by Skinomi provide relief. Protect the display, the back side and the housing of your LG G7 ThinQ permanently from damages and maintain the beautiful look of your smartphone with the protective films Full Body by Skinomi.

The films are made of thermoplastic urethane adapt to the shape of the LG G7 ThinQ and provide lasting protection. Precise recesses for fingerprint sensor, cameras, flash, buttons, speakers and connections guarantee an unrestricted use of the entire range of functions of the phone. The display with the film on reacts normally to every touch. You won’t even notice that there is a display protector on it as it is virtually invisible. Moreover, the screen protection film made of particular materials is self-healing and absorbs small scratches until they disappear over time.

Highlights:
+ Protection films designed to fit the LG G7 ThinQ for perfect all-round protection of the LG G7 ThinQ.
+ Full Body: Protection films in laser cut design provide perfect all-round protection for the LG G7 ThinQ.
+ Film for the front covering the display entirely and leaving out the front camera & speakers.
+ Film for the back with accurate cut-outs for fingerprint sensor, dual camera & flash.
+ The sides are also well protected by precisely cut foils: buttons, USB-C port and headphone jack ae left out.
+ True Touch: the display reacts even with the protection film to every touch and without delay and any restrictions.
+ The screen protection film is made of thermoplastic urethane and is self-healing: small scratches on the film disappear over time.
+ Easy and bubble-free installation: included spray allows to place the protection film accurately and to correct its position on the display during the installation.
+ Skinomi TechSkin Full Body screen protectors can be removed without leaving residues.

The Skinomi kit includes:
Skinomi TechSkin Full Body films: 1x for display, 1x for back side, films for the sides
Microfiber cloth
Spray for the installation
Detailed installation manual